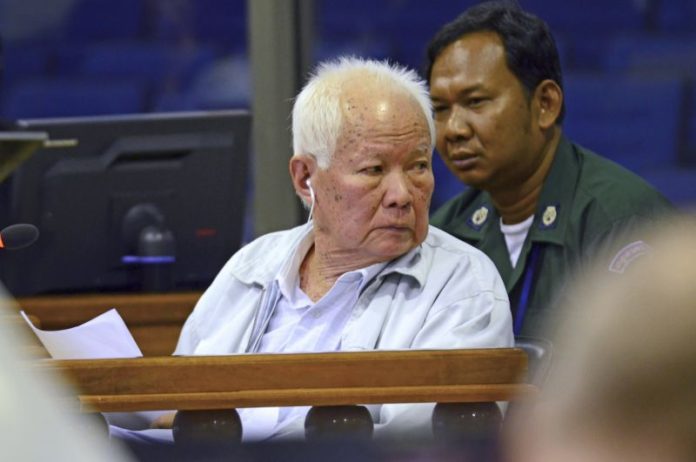 PHNOM PENH, Cambodia (AP) — As his trial for genocide ended, the former head of state of Cambodia’s 1970s Khmer Rouge regime on Friday rejected the charges against him, saying the allegation was concocted by the country’s traditional enemy, neighboring Vietnam.

The 85-year-old Khieu Samphan, casually dressed in a white shirt and tan windbreaker jacket, delivered his closing remarks in front of the U.N.-assisted tribunal where he and a colleague are also accused of responsibility for implementing policies leading to murder and rape, among other crimes.

Khieu Samphan denied knowing about matters including forced marriage and the grievous fate of minorities while the Khmer Rouge held power, saying he only discovered them after the regime’s fall in 1979 and during his trial.

He said he was made aware of the accusations of suffering under the Khmer Rouge regime, “but the term murderer I categorically rejected.”

The Khmer Rouge is blamed for the deaths of 1.7 million Cambodians from execution, starvation and inadequate medical care during their 1975-79 rule.

The two men already received life sentences in 2014 for crimes against humanity. The proceedings against them were split into two parts by the tribunal for fear that the defendants might die before a verdict was reached if it was kept as one. Also separately convicted earlier was the head of the Khmer Rouge prison system who ran a torture center in Phnom Penh.

Khieu Samphan described the claim of genocide as “Vietnamese propaganda,” a defense he and other former Khmer Rouge leaders have made previously.

Cambodians have long been suspicious of their much bigger eastern neighbor, and prejudice against Vietnamese is widespread. Even the 1978 invasion of Cambodia by Vietnam to oust the Khmer Rouge raised suspicions about Hanoi’s motives among many Cambodians. The genocide case includes the killing of ethnic Vietnamese by the Khmer Rouge.

Khieu Samphan sounded another familiar theme in also casting blame on the United States for Cambodia’s problems. The U.S. heavily bombed the Cambodian countryside during the 1970-75 civil war that led to the Khmer Rouge seizing power. Critics of the U.S. action charge that the intensive bombing radicalized Cambodian peasants and served as a recruiting tool for the Khmer Rouge.

“I want to bow to the memory of all the innocent victims but also to all those who perished by believing in a better ideal of the brighter future and who died during the five-year war under the American bombardments and (in) the conflict with the Vietnamese invaders,” Khieu Samphan said. “Their memory will never be honored by any international tribunal.”