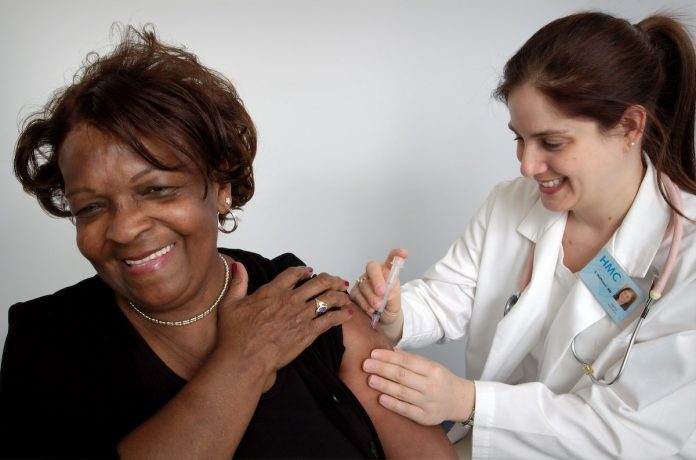 “Test and treat, and you can beat COVID!”

As Californians brace for a winter surge of COVID infections, that’s the message of Dr. Rita Nguyen, speaking at an online news conference on behalf of the California Department of Public Health’s COVID 19 Treatments Task Force.

Her message was echoed by four frontline medical practitioners serving some of the most vulnerable populations in the state.

“We are in the winter surge,” said Dr. Nguyen, who directs the Population Health Division of CDPH. “We are already seeing increases in hospitalization rates for COVID. Rates are increasing and we expect to see even more as we head through December.”

But there is a unique opportunity to address the crisis head-on, Nguyen emphasized. “This is the first winter surge of a three-year pandemic where we actually have treatments that are highly effective, readily available, and free to anyone over the age of 12.”

The challenge, Nguyen noted, is that most people aren’t accessing the treatments.

Paxlovid, or its alternative Molnupiravir, are antivirals and they are free to everyone, even those who lack health insurance or are undocumented. Remdesivir, which is given via infusions, is not free: costs vary with the level of insurance coverage. All three treatments are time sensitive. Paxlovid or Molnupiravir, must be started within the first five days after symptoms start; remdesivir must be started within seven days.

Timely treatment can prevent the severity of the infection by 50% to 88%. Even among those who are vaccinated, it decreases risk of long-term COVID, by 45% to 50%. Paxlovid treatment in 2022 alone averted an estimated 16,000 – 48,000 severe hospitalizations in California, and an estimated 10,000 deaths, according to Nguyen.

But while treatment supplies are plentiful, access challenges remain huge.

Dr. Daniel Turner-Lloveras, executive director of the Latino Coalition for Health Equity, believes lack of internet access and digital skills may be the biggest obstacle.

He cited the case of his mother who recently tested positive for COVID-19. She had phoned her clinic to try to get a doctor but had been waiting all day for a return phone call. Turner Lloveras also called his mother’s clinic, but was forced to leave a voice mail which was not returned.

“As a physician, I am very aware of the benefits of getting early treatment with Paxlovid,” he said. When he sent a message to the clinic’s online patient portal, he got a call back within an hour. “It made me realize that almost every social determinant of health now is enveloped by the need to have internet access and the ability to navigate the World Wide Web.”

More than 35% of Latino workers have no digital skills, and 20% have just limited digital skills, Turner-Lloveras added, noting that digital inclusion now impacts most factors in modern society, including the ability to get a job and support a family.

“Without digital literacy and digital skills, you’re offering gas to a family that has no car. Telehealth is a valuable resource but cannot be used without those skills.”

Dr. Oliver Brooks, chief medical officer of the Watts Healthcare Corporation in Los Angeles, concurred with Turner-Lloveras. He noted that 1 out of 5 Black households have no internet access, limiting their ability to access healthcare in a timely manner. He stressed the importance of testing as soon as any symptom appears: runny nose, cough, gastric distress, fever, and other conditions.

The Black community has much lower rates of treatment, not because it wasn’t accessible, but because it isn’t offered to them, said Brooks. “Treatment doesn’t work if you don’t take it or get offered it. So as a person you need to advocate, you need to know about treatments and then say, ‘I tested positive. Do I take this pill? Do I take something?’”

According to new data from the CDPH shared by Dr. Nguyen, 37% of White patients who presented with COVID symptoms received treatment, while only 20% of Black people got access to care.

One of the most vulnerable populations are adults who are 65 years and older and account for nearly 90% of COVID deaths.

Dr. Wynnelena Canio, who specializes in geriatric medicine at Kaiser Permanente in Petaluma, Ca., and is an advisor with the California Department of Aging, noted that “as people age, we accumulate chronic conditions that cause us to have decreased reserves with which to compensate or recover from stressors such as infection.

“A lot of older adults become more frail, losing more muscle mass and becoming more dependent on others after hospitalization. That in turn leads to more disability and possible institutionalization.”

Early treatment of any conditions in older adults has proven to have better outcomes, Canio emphasized. That includes especially getting the new updated boosters, which only 12% of Americans overall have received.

Dr. Jasmeet Kaur Bains, a family physician from Kern County in California’s Central Valley, who was just elected to the California State Assembly, spoke about the challenges in accessing health care for rural residents.

Bains, who grew up in the county, said when she was a child, a pediatrician could usually be seen within a day. Today, it can take two to three months.

The pandemic brought accelerated rates of retirement for doctors and skyrocketing unemployment rates. As people lost their jobs, they also lost health insurance coverage, Bains noted. Language barriers added to the access challenges. Many resources were not available in Spanish or Punjabi, two commonly spoken languages in Kern County. Added to this, issues like poor air quality and resulting lung disease led to high levels of hospitalization and deaths in her region.

“The lens needs to be focused here. The surge is real, it’s happening and it’s at the detriment of areas like rural California.”

Access issues notwithstanding, all five physicians agreed that getting tested and treated early is the message underserved communities need to hear.

“Don’t wait till the illness gets worse,” said Nguyen. “If you start feeling a runny nose, cough, or generally not like yourself, act fast and take a COVID test. If you test positive, seek treatment right away.”