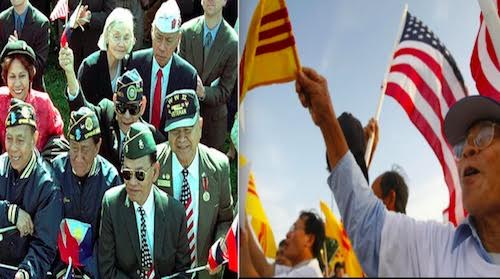 Quick, what do Vietnamese and Filipino Americans have in common? If you said that both communities hail from Southeast Asia, you’d be right. But the commonalities don’t stop there. Both communities also have sizable numbers of naturalized citizens, many of who are casting wary eyes on China’s ongoing aggression in the South China Sea.

For Democratic presidential hopeful Hilary Clinton, whose record on security in the region is well documented, that could prove decisive come November.

“The future of politics will be decided in Asia, not Afghanistan or Iraq,” wrote then Secretary of State Clinton in 2011, in a much-touted essay for Foreign Policy magazine supporting President Obama’s strategic “pivot to Asia.”

While turmoil in the Middle East ultimately derailed Obama’s Asia pivot, analysts believe that as president, Clinton would again seek to reinvigorate the policy to secure U.S. primacy in the region and to ensure the United States remains “at the center of the action.”

And there is plenty of “action.”

In the years since Clinton’s essay appeared, China has continued to build up its presence in open waters around the South China Sea, posing a direct challenge to the territorial sovereignty of several Southeast Asian nations, including Vietnam and the Philippines.

Beijing continues to construct military bases –including a 3000-meter runway, two helipads and a radar tower – on artificial islands that lie in open waters. A report out this week, meanwhile, notes China began flying “aerial combat patrols” over these same waters despite a ruling by a United Nations tribunal invalidating Beijing’s claims to territory in the region.

While China rejected the ruling, Filipinos and Vietnamese – including those in the United States – turned out in droves to celebrate.

Indeed, if there is a core issue linking Vietnamese and Filipino American voters, it is Chinese aggression and the threat it poses to the territorial integrity of their homelands. It’s an issue that could drive enough of them to vote in states where their numbers are growing and where recent electoral victories have come at the slimmest of margins.

Take Florida for example. The state played a pivotal – if not controversial – role in ushering in the Bush presidency in 2000 with a slim margin of just 536 votes. Today, the combined Vietnamese and Filipino population there hovers around 200,000. In Nevada, another swing state, Filipinos number around 120,000. And in Georgia, the two groups combined make up around 80,000. (There is, incidentally, also a significant Korean presence in Georgia of around 100,000.)

As Florida showed, a few hundred votes in either direction can alter the trajectory of the nation and the world.

Given all this, one would assume Democrats and Republicans would be lining up to court Filipino and Vietnamese voters. But according to a survey put out last May by the non-partisan group APIA Vote, “Asian Americans were less likely than other racial groups to be contacted.”

Indeed, GOP nominee Donald Trump this week went so far as to indict the Philippines, saying the country was part of a “Trojan horse” of “terrorist nations” threatening the United States. His comments have already touched off a fire storm both here and in the Philippines, where lawmakers have proposed banning Trump from visiting.

But even among Democratic strategists, who have long focused on winning over the Latino and black vote, Asian Americans are often a second thought at best, the assumption being most are solidly blue. Which is true, to a point.

According to the APIA Vote survey, Clinton’s favorability ratings among Asian American voters came in at 62 percent, compared to 61 percent unfavorable for Trump. But the survey also found 23 percent of Filipinos and 22 percent of Vietnamese found Trump favorable.

Vietnamese, in particular, have a long record of supporting Republicans going back to the days of Reagan and the fight against Communism. Many Vietnamese still regard the GOP as being stronger on national security.

And this is where Clinton’s stance on the South China Seas comes in handy.

Clinton needs to remind Vietnamese and Filipino Americans of her record in Asia, of how she helped bring about democratic elections in Burma and shifted that country’s alliance from China toward the United States.

She needs to convince them that if Trump wins he will be an unsure and inept hand at America’s helm. This will surely steer America and its allies toward disunity, and therefore open opportunities for expansionistic neighbors China and Russia.

All politics is local. But given shifting demographics, local also means the assurance of strong foreign policy experience. For Clinton, guaranteeing the security of the South China Sea may very well be the key to driving Filipino and Vietnamese American voters to the booths and opening the door to the White House in November.