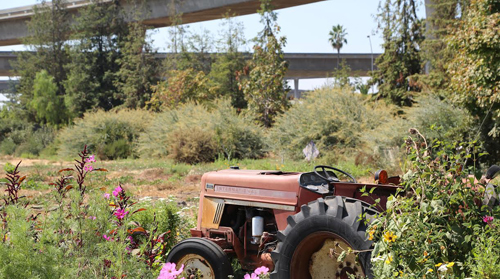 SAN JOSE, Calif. — Martha Barahona wants to change her community’s diet, one backyard at a time.

“We’re in Silicon Valley, and don’t get me wrong – I love technology,” she says. “But I can’t eat computers. Here we have the perfect weather to grow everything. Why aren’t we taking advantage? Out community is ready to grow.”

Seven years ago, the San Jose resident, an immigrant from El Salvador, joined La Mesa Verde, a project that helps low-income families build backyard vegetable gardens. She says she was suffering from clinical depression and other health issues, and “wanted to do something for myself.”

Now, besides boasting a backyard garden of her own in the city’s Washington neighborhood, Barahona works to bring fresh food to more immigrant families by teaching workshops and organizing community members around local policy issues.

La Mesa Verde is part of a growing cohort of Silicon Valley organizations seeking to connect residents with the region’s substantial agricultural roots and to expand access to healthy, fresh food.

“Traditional government and policy have pushed food away from where people live, and this is part of why you’ve seen such a deterioration of public health,” says Zach Lewis, executive director of Garden to Table, a San Jose nonprofit that “rescues” unwanted fruit from backyard trees and delivers it to food pantries.

About one in three Santa Clara County adults experiences food insecurity, according to the most recent County Community Health Report. And food access remains a persistent barrier – only 18 percent of food stores carry healthy options, and few of these are located in low-income neighborhoods like East San Jose.

This is a pattern that organizations like La Mesa Verde and Veggielution, an urban farm tucked alongside the 680 freeway in East San Jose, are working to reverse.

“Food traditions are ties to all of our histories, and making this space accessible to low-income communities of color like East San Jose is the center of our mission,” says Veggielution’s executive director Cayce Hill. The farm’s “Cocina” program brings together residents and community chefs for Spanish-language healthy cooking classes in the farm’s open-air kitchen. Hill spoke at a recent tour for reporters held on the four-acre farm located in Emma Prush Farm Park.

While Silicon Valley is known for cutting-edge technology and the wealth that comes with it, poor neighborhoods like East San Jose have some of the highest inequities in the Bay Area. Low-income kids in Santa Clara County are 60 percent more likely to be overweight compared their peers. Heart disease and diabetes are also growing problems, with large disparities among the county’s low-income and non-white residents.

Jamie Chen, organizing director with La Mesa Verde, says many families seek out their garden programs precisely because they have health issues, including diabetes, obesity and cancer.

“We want to bust the myth that low-income or immigrant families need to be taught what is healthy,” she says, emphasizing that the barriers are more tied to access and cost.

The movement to grow fresh food in the city’s backyards and public spaces – and improve community health in the process – is being fueled in part by 2014’s Measure Q, a 15-year parcel tax that generates funding for land conservation projects. The Santa Clara Valley Open Space Authority (SCVOSA), the independent special district responsible for implementing Measure Q, has devoted up to a quarter of funds for projects in urban areas, through an Urban Open Space grant program.

“We’ve heard from the community and residents that community gardens and urban gardens are in top demand and are a great way to connect to nature,” says Marc Landgraf, external affairs director for SCVOSA, who noted that almost 90 percent of voters supported the measure.

The Open Space Authority made its support for urban agriculture front and center at the annual Harvest Feast, held at the Coyote Valley Preserve in Morgan Hill. Hundreds turned out to enjoy local fruits and vegetables, learn about backyard gardening, and attend cooking demonstrations by community chefs.

Despite the broad base of community support and growing demand for local produce and urban gardens, advocates say significant barriers exist.

Last fall the County Board of Supervisors approved one powerful tool, the Urban Agriculture Incentive Zone (UAIZ), which would give landowners a tax break for committing their land for food production. Neighboring cities like San Francisco and Sacramento already have similar programs in place.

While up to 600 sites in San Jose may be eligible for the incentive, the City Council must adopt the measure for landowners to apply. The Council is expected to vote on adopting the ordinance next month.

“So many parts of our county lack healthy foods. They are food deserts, and we need to encourage property owners to look at their vacant lots to see if they are a possibility for urban agriculture,” says Ken Yeager, a member of the Santa Clara County Board of Supervisors. “Our county existed before the microchip, with agriculture, and we need to return to those roots.”

Urban agriculture leaders agree that their movement connects people to their roots – not only those of the Santa Clara Valley, which once contained some of the most productive farmland in the county, but also those of the home countries of many immigrant residents.

“Many families bring with them a deep tradition of agriculture and connection to the land,” says Hill. “We learn from our neighbors, all the time.”

For starters, Veggielution’s largely Hispanic and Vietnamese neighboring communities influence what the farm grows: herbs like epazote and lemongrass fill the raised beds by the farm stand.

San Jose community members itching to grow their own produce can contact La Mesa Verde, which is recruiting new families like Susan Nguyen’s to take part in their backyard program.

“People ask me, ‘How come your tomato is so good?’ I say it’s because I grew it with love,” Nguyen says.

This article is part of a project in collaboration with the Santa Clara Valley Open Space Authority to raise awareness of land conservation issues in the South Bay Area.